I recently wrote two articles; one outlining the background to the scaling debate and recent near-forks, the other about Bitcoin Cash and how Luno will (and won’t) support it.

Update: you can now instantly sell your Bitcoin Cash on Luno, without the need to send it to another platform. Information further down.

In a nutshell: forking a digital currency is taking the rules of the current currency and saying from a certain point in time, that the original rules will still be applied to the original currency –the rules governing sending the currency, storing it, processing the transactions and so on– and that a new set of rules will be implemented for the new currency. So, if you have one coin of the original currency before the fork, you’d have one of those, but also one of the new ones. Bitcoin Cash came into existence on 1 August 2017 and most Bitcoin platforms are now starting to show their customers’ Bitcoin Cash (abbreviated as BCC or BCH, depending on the platform).

It’s not all that difficult to create or fork into existence a newer (or even better) digital currency. Anyone can do so. The “trick” is having groups of developers working over a decade on refining the open software, startups and companies create platforms compatible with wallets all over the world and creating an entire ecosystem that underpins a currency.

Bitcoin has the most mining power in the world, the most wallets, the most businesses that have it integrated and the most consumers that use it to transfer and store wealth, the most governments and banks that understand it, the most consumers with access to it, and the most use cases for using it as a store of wealth or a medium of exchange. For every Bitcoin, in theory, there may now one Bitcoin Cash, but the long term prospects and viability of the new currency seems rather pointless and dull.

Bitcoin Cash implemented larger block sizes, aimed at solving the problems the Bitcoin network congestion. But a there are already a tonne of small currencies that process  faster payments, but they don’t risk de-throning Bitcoin anytime soon. I believe Bitcoin Cash will just become (or remain) a low market-cap altcoin without significant miner support, without significant momentum and without significant use cases. Something that just piggybacked of some early news and distribution and will probably go down in value over time.

After the first exchanges added the currency to their platforms, the price of Bitcoin Cash skyrocketed north of $700 USD. It has since been on a steady decline. The reason is probably pretty obvious: people probably don’t really believe in the long-term prospects of the project and are happy with the “free money”, where they can still sell their tokens for a few hundred buck a piece.

Other than the digital currency platforms that signaled support for Bitcoin Cash trading (between the BCH tokens and, say, Bitcoin or the US dollar), most Bitcoin platforms still haven’t enabled BCH withdrawals yet.

But, more and more people are logging into their Bitcoin platforms, seeing a notice that they now have Bitcoin Cash available and are asking:

So, how do I sell my Bitcoin Cash?

Step one: get a Bitcoin Cash receive address

Have a look at the Bitcoin Cash Markets page on CoinMarketCap. It shows the volume of Bitcoin Cash traded against other currencies (Bitcoin being the most popular one) and the estimated price it is trading at, in USD.

Step two: find out if they allow deposits yet

Despite many of the Bitcoin Cash platforms trading the currency, not all of those platforms allow you to deposit or withdraw BCH tokens yet.

Note that some platforms use BCC and others use BCH for Bitcoin Cash. They are the same thing. Most are going for BCH, since BCC was used by an earlier, dubious coin called Bitconnect

Since Bittrex has the highest volume, let’s go with them.

Since we will be trading Bitcoin Cash for Bitcoin (and not a local or fiat currency like Chinese yuan or US dollar), most platforms won’t require lengthy ID-verification processes. In this case, we’ll just need an email address and a unique password (and two-factor authentication if we’re going to leave the Bitcoin on the new platform).

On Bittrex, click on Wallets and search for “Bitcoin Cash” (or BCC). Press the plus button (since we want to add Bitcoin Cash to our Bittrex account)

You will be able to generate a new Bitcoin Cash wallet address. Copy it.

On Luno (or whatever platform you’re using) navigate to your Bitcoin Cash wallet or notification area. You should see a “send” or “withdraw” button.

On the next screen, enter the amount you want to send and paste the Bitcoin Cash wallet address from the previous step: 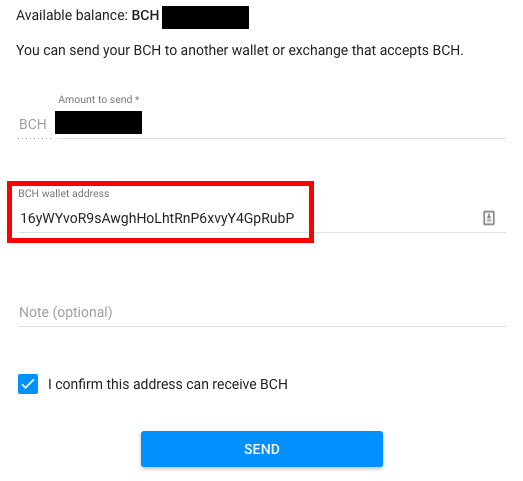 Many miners dropped support for Bitcoin Cash and, at times, over 12 hours have passed between the mining of blocks. Your receiving platform (Bittrex in this demo) may require three confirmations.

Additionally, most sending platforms (Luno, in this demo) don’t have systems to automatically send the tokens and may only do so in batches during business days.

Regardless, you’ll have to wait a bit.

Once your Bitcoin Cash arrives on Bittrex, you’ll be able to trade it. Do so by clicking:

Or, you can just go to this handy link: https://bittrex.com/Market/Index?MarketName=BTC-BCC

Have a look at the order book to get an idea of what the market of buyers and sellers (of BCC tokens, on Bittrex) looks like in the bids and asks.

Using the data in the graph above, on the left, top line, we can see that there is a trader (or group of traders) that has a bid price of 0.05980070 Bitcoin (which, at time of writing is about $194.35 USD) on an order to buy 27 Bitcoin Cash tokens. This means, that if you wanted to sell up to 27 BCC right now, you will be able to do so and you will get ~0.059 BTC per BCC sold (minus some fees that the platform may charge). If you wanted to sell more, instantly, you’ll have to work your way down in the order book and get a progressively worse (lower) price for each Bitcoin Cash token thereafter.

Now, you need to decide if you’re willing to sell your tokens at the best bid price or if you want to set a price a little higher (hoping that a buyer will come by and close your order). This is the maker-taker model: if you “take” an order from the market you’re guaranteed your price, but exchanges also charge a higher fee on those. Alternatively you can “make” an order at a slightly higher price, add liquidity to the market and be rewarded by a lower fee (and hopefully a higher amount of money in your pocket if your order closed).

Since I don’t really want to monitor the market, I’ll just sell at the best bid and get it over and done with.

Once all your trades have closed, you should have a balance of zero Bitcoin Cash and some Bitcoin.

Step nine: sell your Bitcoin (if you want to)

Since I believe in the long term prospects of Bitcoin, I’ll just keep it on Luno and sell it for South African rand if and when I need it.

Sell your bch on luno

Luno just added the ability, for verified account holders, to sell Bitcoin Cash for Bitcoin, right on the Luno platform. As mentioned before, do your homework and see which Bitcoin Cash markets offer the best exchange rate. That said, this “instant sell” feature in Luno is the easiest, by far.

Thanks for reading! Let me know if you have comments or if I missed anything.